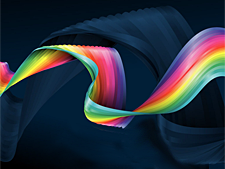 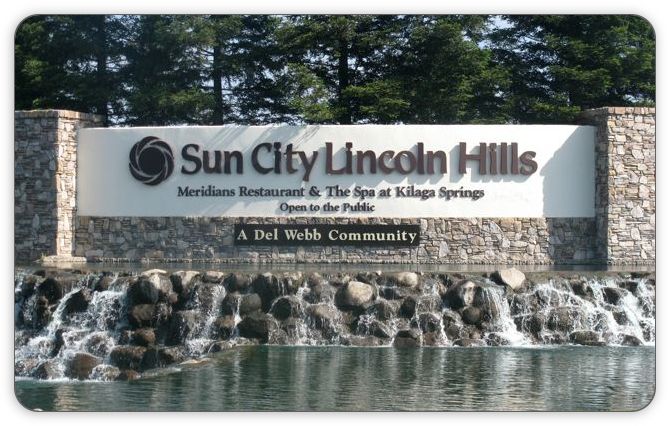 It begins with a mystery. A family friend had called upon Tom Brutting to help her unlock an ornate Chinese cabinet she had inherited from her cousin. No key was to be found but, finally, his husband managed to jiggle it open.

What they found inside became a metaphor for Tom’s first-ever book, a memoir of personal recollections entitled “Unlocking Cousin Daisy’s Cabinet.” 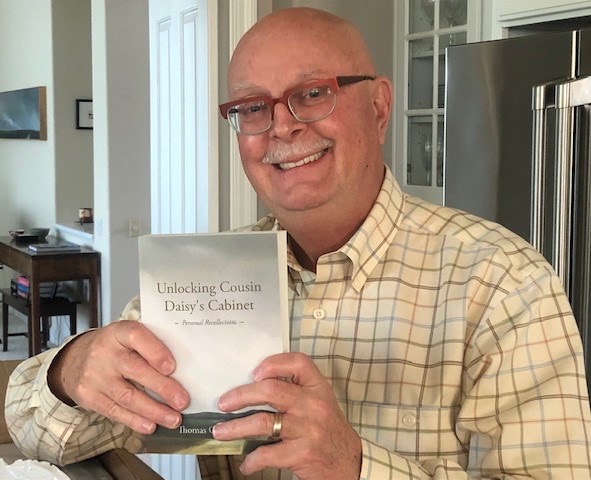 Released in April by The Conrad Press, a British-based, independent publishing house, the book is not your typical autobiography. Instead of the traditional chronological narrative, the chapters read more like separate essays — by design.

“I wanted the stories to stand on their own,” explains Tom, who moved here in January from the Bay Area with his husband, Ed York, a retired tax preparer. They quickly became two of Lavender Friends’ newest members.

He spent much of the COVID-19 clampdown writing the book — at least four hours a day, seven days a week. From growing up in New York, to studying at Tulane University in New Orleans and his career as an award-winning architect, he wrote of lessons learned during his eclectic travels, his experiences with family and friends, his culinary adventures, as well as some very tough times (including the murder of a friend, where during the trial he overheard the grandmother of one of the defendants say “she couldn’t understand the big deal as they had only killed a gay man”).

Before Tom was finished, he had written more than 500 pages, ending with uplifting testimonials on such topics as community, work and love.

His bottom line message to readers: “I want them to feel that we should face all our challenges in life in a positive way.”

Oh, yeah, what did they find inside cousin Daisy’s cabinet? Guess you’ll just have to read the book.

Lavender Friends is a club of LGBTQ residents and their supporters.

With the ceiling fans spinning and the misters spraying to cool us down in the heat wave, nearly 60 club members gathered at the Sports Pavilion last month for the return of our mixers. That’s almost a two-thirds turnout, which president Marilyn Kupcho noted was a number that Placer County Elections would have dearly loved in the recent primary election.

The mixers were launched several years ago to help new and old members get to know each other better. This particular mixer also came with a catered barbecue dinner and ice cream for dessert. The no-host bar and ice chests filled with water helped keep us refreshed. And we had the best elixir of all: each other. 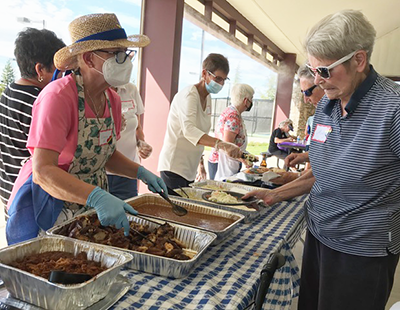 Our club’s mixers returned last month with a BBQ dinner in the Sports Pavilion.

Membership chair Sara Vega, who was in charge of organizing the event, welcomed 16 of the men and women who have joined since COVID sidelined our mixers and paid homage to the members who were here back when the club was officially organized in 2009.

Sara also gave a shoutout to all the volunteers who made this happen – from decorators to folks who staffed the registration table and the servers who scooped up the potato salad, coleslaw, beans, chicken, pulled pork and veggie burgers.

“People really were ready to reconnect,” Sara said afterward. “To see their old friends – and to make new ones.”

“At the time, I didn’t think the newer members were really getting to know the existing members — or vice versa,” remembers Sheila, who was our club’s membership coordinator.

So she had an idea to hold a members-only event that combined food with a meet-and-greet. The upshot? Says Sheila unabashedly: “It was a big hit!”

That was several years ago, and since then the mixers have become an anticipated highlight — whether we gathered in the Solarium at Meridians for appetizers or in a room at Kilaga with meatballs and shrimp in a do-it-themselves affair spearheaded by another membership coordinator, Laura Niles.

COVID sidelined our mixers — but this month will mark their return with a special catered BBQ dinner at the Sports Pavilion.

There’s a new membership coordinator, Sara Vega, though the goal remains the same: to help newbies and old-timers get to know each other better. This is particularly important since we have had more than a dozen new members join since our last mixer.

In 1999, President Bill Clinton issued the first presidential proclamation for Pride month in June, saying in part: “I encourage all Americans to observe this month with appropriate programs, ceremonies, and activities that celebrate our diversity, and to remember throughout the year the gay and lesbian Americans whose many and varied contributions have enriched our national life.”

So it goes for the proud members of Lavender Friends, a club formed to represent and support LGBTQ residents here in Lincoln Hills.

Like so many other residents, our members have come from all over the country after enriching careers in the military and education, medicine and engineering, and in many other public and private sectors of our workforce. After settling here, we have participated proudly in our new home as mailbox captains and Neighborhood Watch members, as well as volunteers in the local libraries, food bank, animal shelters, community garden, houses of worship and sports teams.

You might say we live out our Pride in as many ways as the colors on the rainbow flags flown this time of year.

But back to the mixers. When the last bit of veggie burger and pulled pork and chicken is served at this month’s BBQ, Sara’s hopes mirror those of Sheila from years ago: that we all will leave more comfortable in each other’s presence. “To get acquainted and reacquainted,” is how Sara puts it.

Since our formation 16 years ago, our club has supported Stand Up Placer ’s efforts to serve survivors of domestic violence, sexual assault and human trafficking in Placer County.

We have participated in their fundraising events, subsidized holiday meals to safe-house occupants, coordinated clothing drives for the agency’s thrift store and, most recently, donated $887 to support the agency’s mission. 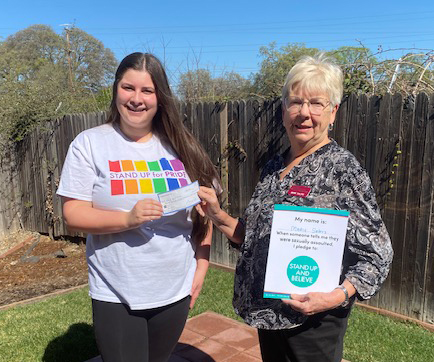 Marie Salers (right) presents a check for $887 to volunteer Marian Ames of Stand Up Placer.

Marie Salers, who spearheaded many of these events, expressed gratitude for the agency’s inclusivenesses to serve the LGBTQ community.

“The club has invited Stand Up Placer staff as speakers at club functions to educate our members of the agency’s mission, and encourage club members to promote their services to people they know outside of the club,” Marie said. “At times, the LGBTQ community is in need of these types of services and it is reassuring to know that LGBTQ referrals in Placer County are not denied when crisis intervention is needed.”

Listening to new club members tell their stories recently was a reminder of the depth and breadth of backgrounds of the men and women who live here in Lincoln Hills.

Several of them were born and raised in California. They worked in education and health, in state agencies, such as CalTrans and Corrections, and at least one is still in the workforce. Among them is a trained horticulturalist and a former assistant conductor of an Army band.

One new member joined as an ally, a designation given to those who join in support of our club, which was founded 16 years ago for LGBTQ residents.

In all, 14 people joined Lavender Friends over the past two years. They were welcomed at a special reception hosted Feb. 22 by membership chair Sara Vega. Most of these new members moved here during the pandemic, braving the COVID clampdown to pick up and start a new life in this (usually) very active community.

Meanwhile, the club held its first-ever pool party in Orchard Creek’s billiards room, after which they were joined by other members for an outdoor happy hour at Meridians.

Coming up soon is a bocce ball outing and a wine tasting – part of our ever-evolving journey through the diversity of offerings in our community and its surroundings. And on June 11, which also happens to be during the month of Pride, we will hold our first members-only mixer since the pandemic began two years ago. Plans are for a catered barbecue, complete with no-host bar. RSVP forms and details are being emailed to members.

Each year, we’ve come to call the ritual of turning our clocks ahead an hour as a time to “spring forward.” It’s also an apt title for what our club is doing – springing forward, tentatively and (hopefully) safely, with a cornucopia of ideas for activities.

In addition to a brunch on March 12, here’s what we are looking at for the coming months: bocce ball and social hour, a winery visit, a potluck and game night, and soaking up some local history at a museum here in town.

Oh, yeah, in honor of Pride month, mark your calendar for an all-club mixer on June 11.

Details are still being firmed up as of this writing, so pay attention to that weekly list of happenings, which arrives in your email on Fridays.

Meanwhile, the biannual meeting of our club’s Steering Committee is set for July 16 and the all-member biannual business meeting will follow on July 30.

As for that other “spring forward,” don’t forget to turn your clocks ahead one hour for Daylight-saving Time in the early morning of March 13.

You know the story: a new year brings new changes – and, in our case, news of a special gift on our behalf. 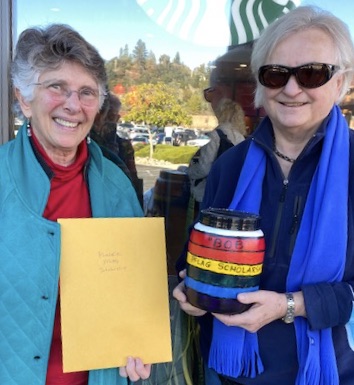 Sharon Kurth (right) presents Margot Fulmer, chair of the PFLAG Scholarship Committee, with a check for $2,427.

In her announcement of the gift, club president Marilyn Kupcho noted that Lavender Friends is committed to supporting nonprofit organizations that serve the LGBTQ community. PFLAG is a national organization that provides resources and support for lesbians and gays and their families and friends.

As for the administrative changes, Marilyn has appointed Sara Vega as the new Membership chair, replacing Laura Niles, who for four years faithfully reached out to new members (including nine this past year). Sara joined the club two years ago (she moved here from Rocklin) and is looking forward to helping new members settle into our community. As she puts it, she wants “to be of service, in a very small way.”

And Nancy Newhart has been reappointed Communications chair for a second two-year term. Among her duties is putting out a newsletter of events that she affectionately calls “the weekly,” which arrives in our email boxes by breakfast time on Fridays. Her goal: “to get people excited about coming to events.”

If members have noticed that Nancy’s emails seem to be getting longer, with more graphics and details, it’s not their imagination. She blames it on her advertising degree. “I’m just trying to make it more interesting,” she says.

A California native, Nancy moved here in August 2019 from Pleasant Hill in Contra Costa County. Five months later, she volunteered for the Communications position. “What better way to get to know the club and its members,” she explains.

December was a festive month for our club, with two holiday celebrations enjoyed by members. Our largest event of the year, the annual Holiday Dinner/Dance, was held at Turkey Creek with 93 members and guests attending. The dance floor was full all evening as our favorite DJ, Jammin’ Jo, provided the tunes that kept everyone moving. Jammin’ Jo has brought her talents to 11 of the 13 holiday dances held by Lavender Friends. Generous attendees also donated $1,732 for the Placer PFLAG scholarship.

Safety was a top priority, with proof of vaccination required. “Everyone had a great time and welcomed getting back to normal for a change,” said Sharon Kurth, co-chair of the event. “The club’s decision to check COVID vaccination status made everyone feel at ease being together.”